When the Going Gets Tough The Tough Get Going

I may have been raw, sore and shell shocked when I got home from the ISAF Mid Year Meeting in Streza, Italy but a quick check on the web told me that I was not the only one.

As I write the petition inviting ISAF to review their decision is past 13800 subscribers and the Facebook Group set up by others has 16,000 followers and climbing.

The campaign to put windsurfing back in the Olympics will not be easy. Nor will it be a sprint. It is more likely to be a marathon but when the the going gets tough the tough get going. The RS:X Class fully realize that this is not a matter just for them. It is a matter for the whole sport of windsurfing.

The initiatives to set up a petition did not come from within the RS:X Class nor did the Facebook Group. They came as a result of the spontaneous combustion of anger and frustration felt by windsurfers round the world. People from more than 100 countries are involved in some way or another.

So what happens now...

Well, we have to make a strategy and execute it whilst crowd sourcing volunteers to carry some of the load.

In the short term, it could look like this...

1. Identify and pull together all of our assets
2. Organise a meeting of stakeholders
3. Create a 'Vote Windsurfing Campaign Team" drawn from all corners of windsurfing
4. Make a multi-layered strategy and action plan
5. Lobby, Lobby, Lobby
6. Send a Lobby team to the ISAF November meeting with a clear strategy

We feel very strongly that everyone with something to lose has to be engaged in the process. Those with time to spare, expertise to share or resources to offer should contact votewindsurfing@gmail.com in the meantime there is plenty to do...

If you have a smartphone or video camera and know a young racer - Do this...

Use a smartphone, make a short video with each young racer... Ask 2 questions?
1. Why do you love windsurfing
2. What impact has the ISAF decision had on your hopes and dreams?

Ask how they feel about putting their kids into what some might view as an extreme sport that many feel has the potential to impact the rest of their lives in a bad way.

Don't over complicate what you're video clips. Keep them simple. We can edit, convert, encode and upload on to a dedicated Youtube.com channel and Facebook. Just send your raw footage.

It's a simple thing to do. Anyone can get involved. But it is a powerful way to send a message to those responsible for this travesty.

Send your video clip to votewindsurfing@gmail.com together with any ideas that you think will help.

If we all pick up a stone, we can move Mount Everest

Mark van Osch I understood that Group F (NED, BEL, LUX) voted for Windsurfing because there is a very good youth training programme (Techno) in place and a very strong Top-level programme (RS:X) with Dorian van Rijsselberghe. There is a lot of high potential youth in Techno and RS:X with an outlook at the Olympics 2016 (before this decision). 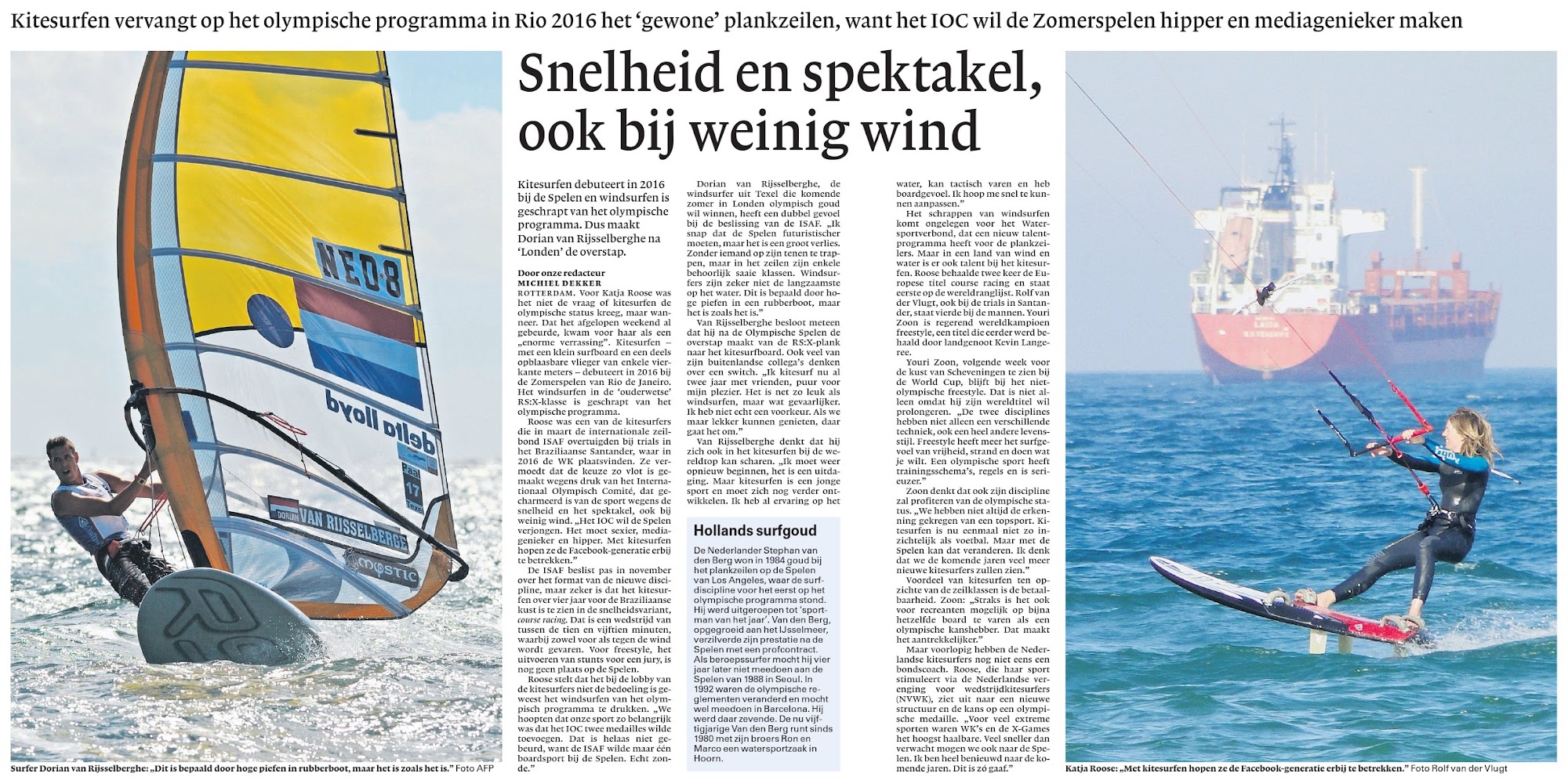 Exclusion windsurf Rio2016: Finally came the statement from the companies in the sector.
Craig Gertenbach, brand manager for Fanatic:
"I personally love both sports, windsurfing, however it currently has structures in place to cover all levels, from the Olympics to national events, regional and local, to the days of sailing school etc.. The kite does not have this structure (anco. ra ..) and it will be difficult to implement the same extent as the windsurfing purely due to the fact that many of the events at all levels, are held in places with little wind, where the kite is impossible. Clearly, the ISAF has not thought of everything 'and the agenda is more about diverting attention from the classes of sailing boat who are aging with the kite as an attempt to jump on that train newly created disciplines such as the Ski Cross. but this should not come at the expense of the most important class of sailing the world, which is still as windsurfing.
Note that on this topic of discussion points there are many more but these are the basic facts for now, in addition to the fact that ISAF with its requirements has totally changed the rules of the game without allowing windsurfing appropriate equipment to respond by presenting this new approach. "